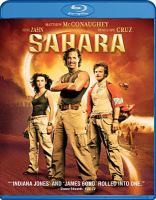 Master adventurer and hunter of antiquities, Dirk Pitt, and his wisecracking sidekick, Al Giordino, have a lead on a Civil War Confederateship that, legend has it, escaped with a rare coin aboard. They cross paths with a beautiful World Health Organization doctor who is tracing a possible plague in Africa. Together they must unravel cllues to solve a mystery to overcome local warlords and ruthless enemies bent on world destruction.
Publisher: Hollywood, Calif. : Paramount Home Entertainment, [2008]
Edition: Blu-ray version Widescreen.
Copyright Date: ©2006
ISBN: 9781415724460
1415724466

Steve Zahn was completely miscast in his characters role. Having read many Cussler's novels, it should have been filled by a massively muscled short Italian.

I can't say this is unmemorable since I remember seeing it. I just can't remember any of it other than a nagging feeling it was pretty disappointing both in story line (particularly if you have read the book) and in performances. I did a quick online search and others seem to have had similar low opinions and this is also reflected in the failure in this era of franchise movies of any follow up movies to appear since 2005.

An okay movie nothing special.

SERIOUSLY -- someone added "epidemic" as a tag for this film?!?
Epidemic - (noun) - An outbreak of a contagious disease that spreads rapidly and widely. Arguably a poisoning isn't a disease/outbreak/epidemic ... not to mention that the poisoning was a lesser vehicle to the film.
Derp - (expression) - An inarticulate response to a foolish or awkward comment, action, person, etc.
Perhaps they meant Epic for the scope of the story - (noun) - A literary or dramatic composition that resembles an extended narrative poem celebrating heroic feats.

This film was fun -- it had all the right tropes for a fun Action/Adventure/Comedy/Thriller flick with touches of well placed rock classics ... although perhaps obvious Hollywood Success Formulaic Equation. It was refreshing in that the 'side-kick' was just as sharp as the main character and the heroine could hold her own instead of being a wilting flower. This is nothing like the part-1 from 1980 "Raise the Titanic" .... oh, you didn't know that Sahara is part-2??? ;) Too bad Saraha flopped at the box office, this modern-day Indianan Jones with a strong element of James Bond could have made for a number of great adventure films.

This movie is very fun and one that I can watch more than once or twice. Very adventurous where the main character is a historic treasure hunter.

This is is awful !
I got this NYPL disc home and put this movie in the DVD player...and the screen says: "NOT FORMATTED FOR THIS REGION" !!?? ( Even though it states "Region #1", on the DVD jacket !!?)

I have watched a thousand other New York Public Library DVDs on my Panasonic Region 1 DVD Player,.. but this one makes it over 32 TIMES that a film has come up as "NOT FORMATTED..." etc. !
I waited a long time to get this highly recommended film.
...VERY DISAPPOINTING !!
I really wanted to see this movie.
And I know that ALL the NYPL copies of this title will have this same problem !!
WHY is the New York Public Library still buying DVD's that are "NOT FORMATTED.." to be viewed in this region ! ??

Has this ever happened to anyone else out there ?

I loved this movie!! It was unpredictable and I really enjoyed the twists in the plot.

RichardPaul thinks this title is suitable for 16 years and over

mbazal thinks this title is suitable for All Ages

Matthew McConaughey stars as explorer and adventurer Dirk Pitt in this adaptation of the best-selling novel by Clive Cussler. Pitt thinks he may have found both a fortune and the answer to a long-standing mystery when he discovers a rare coin in the waters of a river in West Africa. During the Civil War, an ironclad battleship with a valuable cargo went missing, and Pitt's theory is that the coin places the ship somewhere in the Sahara Desert. Pitt and his goofy sidekick, Al Giordino (Steve Zahn), set out to find it, but along the way they make the acquaintance of Dr. Eva Rojas (Penélope Cruz), a scientist and physician who is trying to determine the source of a strange and deadly disease sweeping the nation. As Eva joins Dirk and Al, they begin to wonder if the mysteries they're trying to uncover might be somehow linked.

There are no quotes for this title yet.