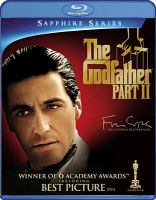 The continuing saga of the Corleone crime family, revealing the story of a young Vito Corleone growing up in Sicily and in 1910s New York, and following a parallel story in which Vito's son, Michael Corleone, attempts to expand the family business into Las Vegas, Hollywood, and Cuba in the 1950s.
Publisher: Hollywood, Calif. : Paramount Home Entertainment, 2010.
Edition: Blu-ray version, Widesreen format, the Coppola restoration.
ISBN: 9781415752517
1415752516

The original and by far the best.
Superb acting, filming, dialogue, and story.
A true classic.

Godfather, part III is the Return of the Jedi of the trilogy. Ewoks meet the mob.

Part II, arguably the best of the Godfather trilogy. Not to trivialize it but I've always considered it the Empire Strikes Back of the series. What does that make Godfather III?

Recently binge watched The Godfather trilogy and this film reminds me of how dirty politics can be:

Politics and crime, they're the same thing; Vast monies have gone to people in high political places and the Vatican Bank (Federal Reserve) is the guarantor.

Watched it again last night and I had the same admiration and awe for this movie like decades ago....10/10

What a fantastic film. I heard much about it, but none in my family had seen it before, so when I and they watched it together on our couch it was an experience.

1971 A superbly made classic gangster movie of an Italian immigrant to NYC circa 1910. who rises to power as a Mafia DON and how he "protects" his extended Mafiosa family. A true classic!

IMHO, the first two Godfather installments qualify as all-time great cinema. Maybe some scenes are too long, but even the stretches with little or no dialogue are tense and gripping - sorta' like Kurosawa stuff.

IMDb has 62 quotes including this one (thanks to its contributors):

Vincent Mancini: Don Lucchesi, you are a man of finance and politics. These things I don't understand.

Don Lucchesi: Finance is a gun. Politics is knowing when to pull the trigger.
===
These two are not:

Politics and crime, they're the same thing.

Vast monies have gone to people in high political places and the Vatican Bank (Federal Reserve) is the guarantor.

Michael: [speaking to Carlo] Only don't tell me you're innocent. Because it insults my intelligence and makes me very angry.

Just when I'm out, they pull me back in
-Michael Corleone

"Leave the gun, take the cannoli."

Jack Woltz: "Tell your boss he can ask for anything else, but this is one favor I can't grant him." Tom Hagen: "Mr. Corleone never asks a second favor once he's refused the first, understood?"

TylerStray thinks this title is suitable for 14 years and over

007Gatsby thinks this title is suitable for 12 years and over

alevotta1 thinks this title is suitable for 18 years and over

jabey thinks this title is suitable for 13 years and over

Violence: People are shot at with guns.

There are no summaries for this title yet.