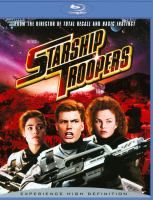 Set on the future earth. Johnny Rico is a young student dating a girl named Carmen. When Carmen decides she wants to become a citizen by joining the military, Johnny follows and joins as well. He soon realizes that he joined for the wrong reasons. Just as he is about to quit, an asteroid that originated from the orbit of planet Klendathu hits Buenos Aires and kills his family. From the bridge of the Fleet Battlestation Ticonderoga to the descolate terrain of the alien planet, they must battle shrieking, fire-spitting, brain-sucking, large-scaled space bugs.
Publisher: Culver City, Calif. : Sony Pictures Home Entertainment, [2008]
Edition: Blu-ray version.
ISBN: 9781424827664
1424827663

The movie is a sly, sharply written indictment of fascism that features one of the best roles Denise Richardson has ever plays. Depending on who you ask, the book is a straightup embrace of everything the movie decries. I'll take the definitely-a-satire every time, especially when it means I do... Read More »

I love this movie. It does not follow Heinlein’s book, so don’t go into it expecting that. In fact, it doesn’t do what the director meant to do, either. On the commentary track, Verhoeven points out the anti-war, anti-fascism messages in the film, and it’s true that some of the characters wear uniforms reminiscent of the Nazis. But Verhoeven missed his mark, and when you’re watching beautiful people do exciting things while accompanied by heroic music, ironic sub-text vanishes like a snowflake in the sun, and what’s left is a rip-roaring action yarn with spectacular special effects. It’s cartoonish and the characters are one-dimensional, but on its own merits as an action movie, this is one of the best of the genre.

This movie is beyond terrible. Sure, it's claimed to be satire, but it has all the subtlety and penetrating wit of a grade-school child making faces and saying "DuRRrRRRr, tHiS Is YOuUuUUUuuuUU!!!!" Verhoeven didn't even read the source material, and essentially based his "vision" on the same tired old criticisms of other people who themselves didn't read (or if they did, they CERTAINLY didn't comprehend) the source material. All of the things they claim the book to be, it is not. As an action movie, this is pure pap, which is allegedly what he intended; as satire, it falls completely flat; as an adaptation, it is a crime against humanity.

An example of just how completely wrong they got it comes from screenwriter Akiva Goldsman, interviewed for an episode of Ridley Scott's "Prophets of Science Fiction." While he did not work on the project, his misinterpretation is characteristic. Goldsman says:

"The spirit of the book is 'they're bad, we're in trouble, we must kill them.' ...Heinlein was more black and white than he was grey."

This is utterly false. The author made a point to describe the conflict in terms of 2 species that were by their nature determined to survive -and to expand in order to help ensure their survival- but that were so utterly alien that they could not understand one another, and thus were unable to find a way in which they could either coexist peacefully or just leave each other alone. He then points out that the Terran Federation was in fact working hard to figure the Bugs out, in the hopes that by learning how they think, what their needs are, and what motivates them, they could then learn to communicate effectively and broker some sort of mutual understanding and peace. He made it clear that annihilation was not to be desired, and was to be avoided if at all possible, but was still a very real option if all else failed. He was a pragmatist: You have to do whatever is necessary to preserve your species, but violence is *not* the only option; when you use it, you use the minimum needed to get the job done (military operations are very, VERY expensive in all senses of the word, after all,) but if that minimum turns out to be to "crack the planet open" sometimes, then you'd better be willing to do that, as well.

The problem was that Heinlein didn't beat us over the head with this message, he simply wove the pieces into the narrative and expected that the reader would find them and put them together. The failure of these filmmakers to pick up on these not-very-subtle subtleties is 100% consistent with the complete lack of finesse, nuance, and intellect in this pathetic joke of a movie.

🐞 Imagine joining the army, and finding out your grouchy, ill-tempered high school English teacher is your drill sergeant. Sounds like a nightmare, but that's what happens to the kids in this movie. Then they get sent to fight giant bugs, with more bug-blasting than the spider-pit scene in the Jack Black "King Kong." Oddly, the bugs don't seem to have any internal organs, just something that looks like cream of mushroom soup.
-
Fast and exciting. Interesting how many reviews below crib from the Leonard Maltin review in his Movie Guide! Wherever you see a reference to a "gung-ho WW2 movie," much of the language is lifted from Maltin.

Paul Verhoeven's campy, space opera-satire on the flaws of militarism, authoritarianism and fascism. While being based on Robert Heinlein novel of the same name, the movie shares very little in common with the original work. In fact, the satirical message of the movie is probably the opposite of the book. Well, opposite in regards to militarism. Authoritarianism and fascism aren't really factors in the book. The movie stands on its own as a cult classic among sci-fi fans, mostly from the unique gritty yet vibrant tones throughout the film.

Is it a Utopian film in that it obliquely criticizes militarism, or is it like a recruitment film for the sci-fi military youngsters. If they had mixed in more sexy visuals, it would have been more effective,as the latter. yeah, it's a mystery, about Veerhoven, i mean, if he meant the film as a critique of militarism ---or not. the early part of the film could be read/viewed, either way.....the battle scenes with the bugs are awesome, as in, realistic. can you have your cake, and eat it too ?

(*Warning!*) - If you happen to have a strong aversion towards bugs, then, "Starship Troopers" (from 1997) may not be the movie for you. Believe me, this SyFy/Monster flick is not for the squeamish with all of its graphic dismemberment of humans and insects, alike. But, with that said, it certainly is a mighty robust and action-packed slice of movie-entertainment, all the same.

Directed by Paul Verhoeven ("RoboCop", "Basic Instinct") - "Starship Troopers" is very much like a gung-ho WW2 movie that's somehow been transported into the distant future where eager high-school kids are encouraged to become "citizens" and serve the state.

All-in-all - "Starship Troopers" is a sharp, energetic and (at times) outrageously funny tale that successfully transcends beyond being just a "giant bug" movie.

The legendary Paul Verhoeven (Robocop, Total Recall, Elle) takes a shot a Robert Heinlein’s penchant for militarism by loosely adapting his novel, Starship Troopers into a satire of fascism, wrapped in a splatter or be splattered, space bugs versus humans episode of Beverly Hills 902010. I remember counting the days for this movie to come out so I could make my mom take me to see it, after catching a trailer for it on a copy of Leprechaun 3. The amped-up gore and bug battles melted my heart and earned it an immediate place in my tiny VHS collection mostly composed of chunky, white vinyl, Disney cases carried over from my pre-preadolescence. As I grew older, the movie grew with me. I began to recognize its camp and enjoyed it for new reasons, until I reached adulthood and finally appreciated it for its full on satire of a world where the military takes precedent over all. The movie isn’t without its flaws, but I applaud Verhoeven for going all in on his vision and not letting off the gas to make something more approachable.

In the first and finest RoboCop movie, director Paul Verhoeven combined near-future science fiction with a keen sense of social satire--not to mention enough high-velocity violence to satisfy even the most voracious bloodlust. In Starship Troopers, Verhoeven and RoboCop cowriter Ed Neumeier take inspired cues from Robert Heinlein's classic sci-fi novel to create a special-effects extravaganza that functions on multiple levels of entertainment. The film might be called "Melrose Place in Space," with its youthful cast of handsome guys and gorgeous women who look like they've been recruited (and in some cases they were) from the cast of Beverly Hills 90210. Viewers might focus on the incredible, graphically intense action sequences (definitely not for children) in which heavily armed forces from Earth go to off-world battle against vast hordes of alien "bugs" bent on planetary conquest. The attacking bugs are marvels of state-of-the-art special-effects technology, and the space battles are nothing short of spectacular. But Starship Troopers is more than a showcase for high-tech hardware and gigantic, flesh-ripping insects. Recalling his childhood in Holland during the Nazi occupation, Verhoeven turns this epic adventure into a scathingly funny satire of fascist propaganda, emphasizing Heinlein's underlying warning against the hazards of military conformity and the sickening realities of war. It's an action-packed joy ride if that's all you're looking for, but Verhoeven has a provocative agenda that makes Starship Troopers as smart as it is exciting.

Kinda terrible...but in a fun way. Kinda good...but in an ironic way. I couldn't tell if they made it corny on purpose or not but I appreciate the effort nonetheless. Fairly entertaining with some memorable scenes...like the "brain bug" that looks like a giant oozing scrotum/anus.

Coarse Language: Yep. There's profanity, but it's not overdone.

Violence: Mostly against aliens, but might make some people squeamish.

Jean Rasczak: This is for all you new people. I have only one rule. Everybody fights, no one quits. If you don't do your job, I'll kill you myself! Welcome to the Roughnecks!

"the only good bug is a dead bug"

There are no ages for this title yet.

There are no summaries for this title yet.